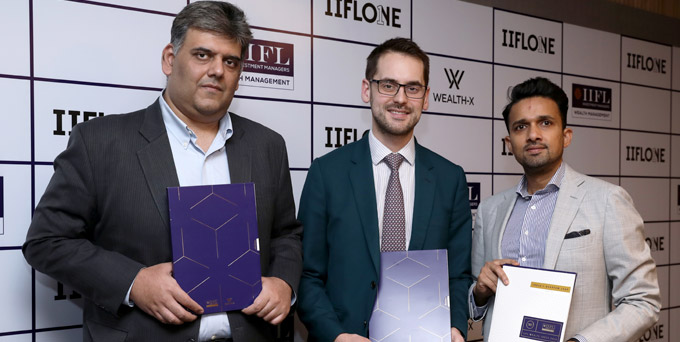 IIFL Wealth Management, one of the leading wealth management companies in India, today unveiled the IIFL Wealth Index 2018 series, in a strategic partnership with Wealth-X, the leader in global wealth information and insights.

The series comprises three individual volumes that explore top-of-mind issues impacting the wealthy in India: India’s Quantum Leap, The Investor Mindset, and Shake up those Assets. The index is the most comprehensive study of HNWIs and Ultra HNWIs in India to date, measuring this group uniquely against wealthy populations from around the world.

The IIFL Wealth Index 2018 is one of the initiatives under the recently launched IIFL-One platform, that offers customized portfolio management solutions to families with investible assets of greater than Rs.10 cr. With the IIFL-One platform, IIFL Wealth Management, aims to bring about a generational shift in wealth management in the country, by challenging the traditionally opaque commission structures and incentives offered to intermediaries and wealth managers, by product manufacturers. The IIFL-One platform aims to bring transparency into the relationship with the client for a nominal fee and move away from the traditional industry norm of pushing products. IIFL-One aims to drive the “Netflixification” of the wealth management industry in India, i.e. move to a subscription model with a better understanding of the client and closer alignment with their needs.

The IIFL Wealth Index 2018 is a culmination of the firm’s initiative to better understand its core customers.

“We are very pleased to have partnered with Wealth-X to develop these unique reports,” said Karan Bhagat, MD and CEO of IIFL Wealth Management.  “The IIFL Wealth Index 2018 not only explores the growth of the wealthy population in India, but takes a closer look into who they are, where they rank among the world's most-moneyed, how they made their wealth, as well as their concerns, priorities and plans for the future.”

India's high net worth (HNW) population growth of 40% over the past five years has eclipsed that of its rivals in economies elsewhere in the world, placing India in a league of its own.  By comparison, the global HNW population and its wealth grew by 3.2% and 4.2%, respectively over the same period.

“India's wealthy population is expected to be the 10th fastest growing in the world in a list dominated by emerging economic powers.” said David Barks – Director, Wealth-X Custom Research. “Economic power is tilting away from the West and towards Asia. This will have a tremendous impact on the global economy in the next five years and India’s wealthy will be at the forefront.”

Part 01: India’s Quantum Leap
As one of the world's fastest-growing economies, India’s HNW population is expected to vastly exceed its global contemporaries, growing by 86% by 2021. Home to 2,84,140 wealthy individuals with a combined fortune of INR95trn, the first volume in the IIFL Wealth Index 2018 reveals that by 2021 that figure will grow to INR188trn, making India a trailblazer among the world's most powerful fortune builders. India’s Quantum Leap takes a meticulous look at the factors that are contributing to this robust growth in India, as well as providing insight into demographics of the wealthy population across the country including analysis of age, gender, education, and source of wealth, to name a few.

Part 02: The Investor Mindset
The Indian wealthy may have a fiercely domestic focus in business but, when it comes to choosing an investment advisor, their search for the very best is influenced by the global outlook the wealth manager can provide. Despite economic and political uncertainties on the horizon, ranging from fear of terrorism to the historic tense relationship with neighbouring Pakistan, India’s wealthy believe the future is bright not only for India but the world economy too. The second volume of the index explores how that confidence translates into a powerful sense of economic destiny, with 96% of those surveyed believing they will achieve their goals in the next five years.

Part 03: Shake up those Assets
The third volume of the IIFL Wealth Index 2018 shows that India’s wealthy are not afraid of risk, but they are careful to manage it by adopting a diversified and sophisticated strategy for their financial investments. Our survey also shows that while wealthy Indians want to make their entrepreneurial and charitable mark at home, there is no doubt that their realm of influence will extend globally. As they move towards the top of the global wealth league table in the coming years, many will be looking to increase their international investments. The wealth investors of India are ready to shake up their assets.

For more information, including details on the methodology and complete findings from the IIFL Wealth Index 2018, please visit www.iiflwealth.com/wealth-x-2018 to download the full report.