Markets fully valued, we are cautious at this stage: Anu Jain, IIFL Wealth 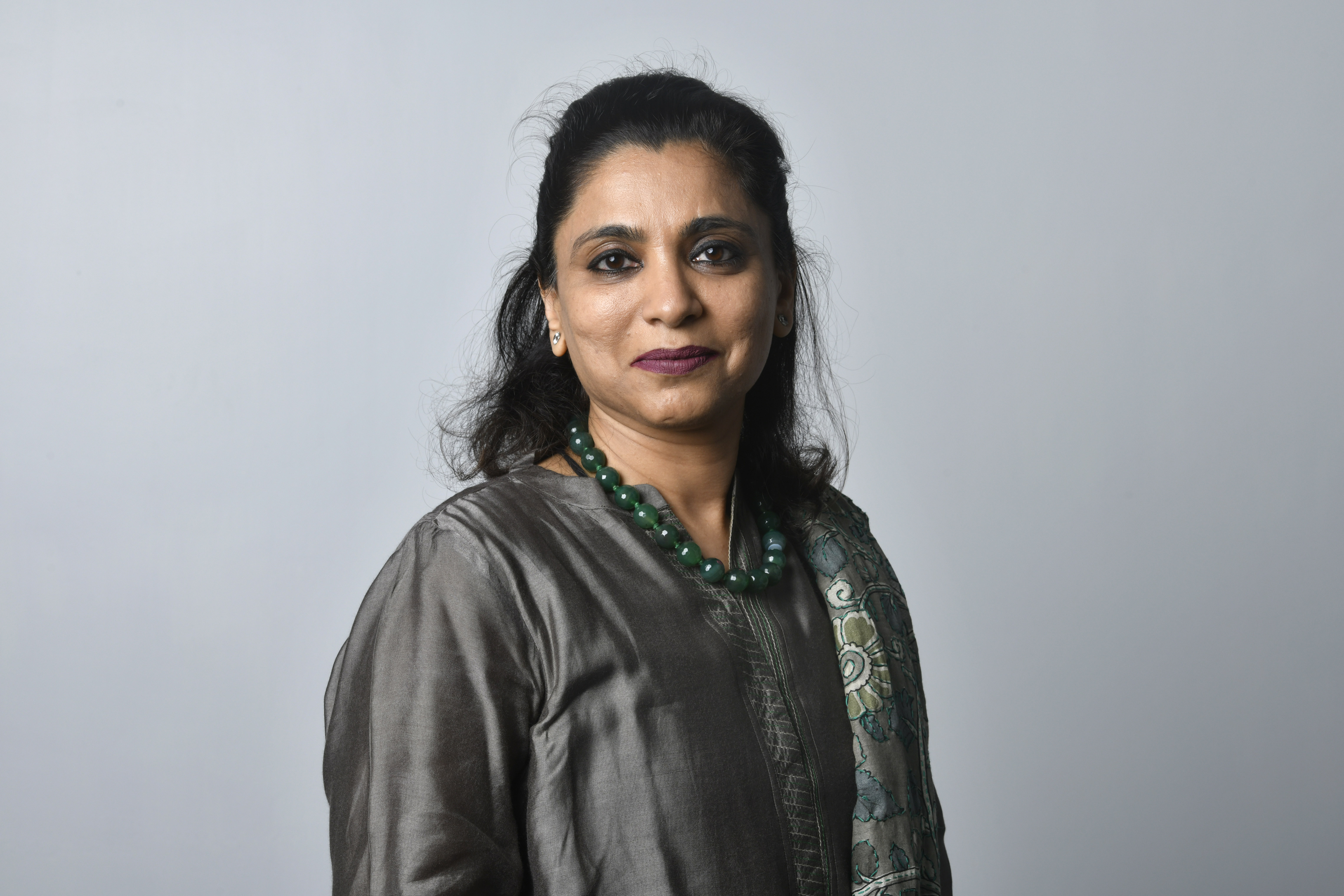 The charts continue to be strong for Reliance and if there is any correction, we would be advising it is as one of the biggest holdings in my model portfolio for our advisory clients, says the Senior Partner & Head of Equity Brokerage at IIFL Wealth.

What are you telling your HNI clients across the country? How are they approaching the markets?

It is different times but humans are a very adaptable race and we make do with what we have, we use Microsoft teams in our office for internal and external communications. Most of our meetings are happening on Zoom video calls. So, it is work as usual for us and clients are very active at the moment both in direct equity and in other places. We have more work than we have had before. We are making the best of what we have.

Airtel had a massive run from Rs 300 odd. hat are your views on Airtel and Voda-Idea? A lot of retail portfolios, big HNIs have positions there?

There is a big difference in the way people are approaching both Bharti and Idea. Whereas Bharti is a long-term stock where the story that people are looking into is ARPU play. ARPU has moved up closer to Rs 200 over a year and a half and the fact that it has kind of paid up more than 10% of what is required to be paid as per the AGR ruling.

Idea is more a play that they will be able to survive and hold 15% market share and this is a bottom up from it. But where I see a differentiation between the kind of people buying Idea and the kind of investors buying Bharti is that Bharti is generally being bought by long only clients who have a view of three years, three-and-a-half years.

Even at this current rate, they are finding that probably this stock can give you a 30-40% over the next year, year and a half. Also it will be fairly resilient as we saw last time in March. This was one of the stocks which was most resilient in the market. It in fact went up when the other stocks were going down. So it is something like a shock absorber for the market. I would continue to hold this even if the markets were going down.

Vodafone Idea on the other hand is more like a trading stock where people participate more for that quick 20% and then sell it. I would like to wait and see if this time, post this announcement and a fund raise, how it goes and whether they can establish themselves; if they are here to stay with a bigger market share because the last couple of quarters has not given any confidence with them losing market share. So while it is a trading stock, I am still not convinced that I would like to hold it in portfolios for two years.

How do you look at the entire lenders basket and which are the ones which you like better than others?

Some part of it has been result oriented also. A lot of the banks have raised capital. Some more capital raising is around the corner and that is pretty imperative for the next six to eight months which is yet set to come. A lot will depend on what is being announced in the next couple of days by the finance minister on how the loans are to be restructured.

Just next two or three days and the market would wait with bated breath as to how that is going to happen. In terms of lending growth, in terms of NPA, we may not really recognise it as NPA but we all know that that is just kicking the can along the road and that is not giving anybody comfort to hold on to lenders where the book or the quality of the book can be suspect.

The high quality banks will be in premium and though they are expensive relative to the rest of the banks, we would continue to hold them. There is again the HDFC Bank, the Kotak Bank and the ICICI Bank which would be our top three which we would hold.

So there are quality names in the NBFCs also but we would be a little more cautious because valuations have been cheaper for some of them but some of them have actually run up very sharply in the last two months or three months. At this price they are fully valued. There is no valuation play right now and with the next six-eight months looking tough on the collection front and on the lending front, we would be slightly more suspect.

Any names you like from the pharma and chemical space? Could it have a big potential going ahead like some others believe?

Yes, we have had a sharp rally for the last couple of months. Pharma has raced ahead. It is taking a breather just like IT is taking a breather. Also, there is some connection to the rupee. We feel that the next one, one-and-a-half-year will be good for pharma given that post Covid, a lot of sales are going to be higher for some products. The acceptability of Indian products abroad is also going to be raised.

We are positive on a lot of names. From the Indian domestic market we like Torrent and Ipca. From the export side, we like Dr Reddy’s a lot. Cadila also seems to be good. Among APIs, Divi’s is expensive but still good to hold. It is not that we are actively adding right there, we have substantial exposure for clients but if there are any corrections, then these five, six stocks seem to have a positive bias for us to add into it.

On the broader markets, it appears that participation is getting wider. What are your thoughts on the small cap, midcap space?

A lot of it is actually good like manufacturing companies. Since September 1, we have got the new margin rules. I would like to see how the next 15 days pan up with people not being able to trade BTST (buy today, sell tomorrow) as much or intraday trading as much. That is one filter I am watching out for.

But for investment, we are actively looking at high ROE companies which have manufacturing as a core bet with a potential export market. Even if you look at everything which comes from the pharma market or the fine chemicals and even the infra companies -- which we are really not looking at but where there is a fair amount of order book and they have a fair source of revenue. If those midcap companies have been fairly beaten down, and we all know the midcap index has been correcting since the last two, two and a half years, and so it has underperformed the Nifty substantially.

It is catching up now and may correct again but I think that there is a potential in that index to be invested on dips for the next two to three years because there there are some very good companies which had not run over that strongly for the last two, two and half years and which have potential to give you at least a 15-18% CAGR which the Nifty may not give you for the next one year.

What is the hypothesis as far as the frontline indices are concerned be it the Nifty or the Bank Nifty? We saw a very vicious cut in March and a big 40% rally. Did you manage to get your clients to participate in that sharp rebound?

The model which we work on is basically using the valuations of the market to decide the participation in equity. This is the IIFL wealth model that we use for clients for deciding how much they should be invested in the equity markets given where the multiples are -- both price to book and using price to equity. The only thing is given this year, I do not think PE model is going to be the best model available. Given that we had advised clients and a lot of clients did add around the 9000 level, I would not say that we got the bottom and we added at 76 but at 84 to 88, a lot of clients did add depending on how their levels were. But beyond 10500-10600, again our model is being cautious at this time especially around these levels. Around 11500, we are into the resistance zone.

Also, 24,400-25000 on the Bank Nifty is also a resistance zone. We are practically there. The fact of the matter remains that these are the valuation calls but liquidity in the market which was coming at about 11 to 12 trillion has been released in the world. Basically, you get very few assets to chase in this particular market situation. So what it is going to chase is not real estate. It is not chasing anything and money supply is up about 36% for us and about 30% in the US markets. So when there is too much money supply and not too many assets that mismatch, markets will go up. With the dollar index continuing to be where it is, it is possible that you will possibly see that from November, there is no major fall till the US elections take place. You may be in a slightly dicey situation where there is very little that you can advise clients to buy and you are not yet ready to take a very strong cash call.

But yes. we are pruning exposures to equity when we nd a severe mismatch in valuations or we nd that we can probably come back to it later if there is a correction. So broadly we feel that markets are fully valued, we would be cautious at this stage.

How are you reading the charts and the structure for Reliance Industries in the short term, medium term, slightly longer term?

Well this has been a market leader from March when it dipped down and from there, a strong breakout came close to about 1200 levels from where it did not give any breather to the rally. It has only been when it has been closer to 2200 and if you look at the partially paid, it has been over that 1250-1300 zone where it has seen resistance.

The charts continue to be strong if there is any correction and we would be advising it is as one of the biggest holdings in my model portfolio for our advisory clients. We would be adding on dips. Long term just charts are indicating that probably 2450 to 2500 is where it is headed to in about a year, year and a half time.

Overall, our research piece is extremely positive on telecom on the digitalisation space and given that it has got a fairly good piece of the retail space as well where there may be some stake sale happening, there will be buoyancy in this stock. In the last one-one and a half month, it has gone to 2000 levels but if you get closer to 2060-2080 levels now, that would be right level to start dipping into it.